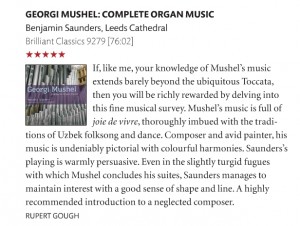 Five star review in ‘The Listener’

“I’m in love immediately and spontaneously in the peculiar music of choice-Uzbeks. One of the best organ music recordings I’ve heard so far this year. He (Saunders), in the UK has an excellent reputation… this album is his debut on the record market. It is high time, we can only say, as Saunders turns out to be an excellent performer, the phrasing is very good, technically also highly convincing and he possesses that rare gift of a personal and individual touch in organ music.”  Rainer Aschemeier, The Listener

Georgi Alexandrovich Mushel was one of the first true exponents of Uzbek music. His complete organ works are recorded here for the first time on the Brilliant Classics label. A composer and gifted painter, Mushel found inspiration in many forms of art, including the architecture of Samarkand, the ancient Islamic city. The music of his Samarkand Suite represents the many different elements of the site, such as the Deserted Hills surrounding the city and the monuments shown in their full splendour thanks to the Rising Sun. The disc also contains the Uzbekistan Suite, beginning with the beautiful Aria and ending with a sprightly Toccata, as well as the Six Pieces for organ, and Elegy.

Samarkand Suite
1 I. Qasida to the Master Builders of Ancient Samarkand
2 II. On the Deserted Hills of Afrasiyab
3 III. The Flowering River Valley of the Zeravshan
4 IV. In the Twilight of the Shakhi Zinda Necropolis
5 V. Samarkand in the Light of the Rising Sun
6 Elegy
Six Pieces
7 I. In memory of Navoi
8 II. Nocturne
9 III. Intermezzo
10 IV. Improvisation on an Uzbek folk theme
11 V. Prelude
12 VI. Fugue
Uzbekistan Suite
13 I. Aria
14 II. Toccata
15 III. Fugue