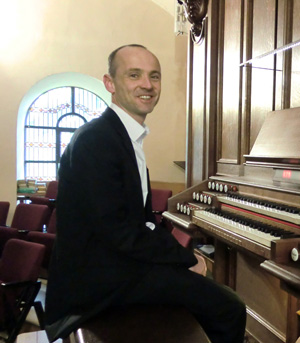 Board of Directors, Leeds College of Music, 2013-present

Benjamin Saunders was born in Warrington and educated at George Heriot’s School in Edinburgh. He received his first organ lessons at the age of sixteen at St Mary’s Metropolitan Cathedral, Edinburgh and two years later won an Organ Scholarship to Downing College, Cambridge, where he studied with Peter Hurford. Upon graduating, he held organist posts at the Cathedrals of St Giles’ Edinburgh, Blackburn, and Chester and continued organ studies with David Sanger, Ann Bond and Michel Bouvard.

In 2002, Saunders was appointed Director of Music for the Diocese of Leeds, leading the department at Leeds Cathedral, the centre of England’s largest choral programme, made up of 7,000 children meeting weekly. Ben has been engaged by many external bodies as a consultant in the management and development of music programmes with particular expertise in fundraising and organisational structure, especially addressing access in marginalised or deprived communities. He was appointed a Director of Leeds College of Music in 2013 and Visiting Professor of Music at the University of Notre Dame, Indiana in 2015. He has been a guest speaker at a variety of university conferences across the UK, Ireland and the United States and a judge for the BBC Young Chorister of the Year Competition. He has also received honorary awards from the Guild of Church Musicians and the Royal School of Church Music. From January 2021 he is leading the National Schools Singing Programme across the UK thanks to a multi-million pound grant from the Hamish Ogston Foundation.

As an organist, he aims to present a varied and accessible programme to delight audiences both young and old, be they new to organ music or lifelong devotees of the instrument. His solo repertoire includes classical, popular and jazz works, some familiar and others new or recently rediscovered. He has also transcribed many orchestral works for the organ and these arrangements often form a popular part of his concert programmes.

Saunders has performed to HM the Queen, Princess Anne and US President Carter and worked with conductor Carl Davis and jazz virtuoso Dick Hyman. Solo tours have led him to give organ recitals in Russia, France, Italy, Holland, Germany, Austria, Slovenia and the United States. Major international recitals have included Koenigsberg Cathedral in Kaliningrad (Russia), Cologne Cathedral, Perugia Cathedral, Berlin Cathedral, Stuttgart Abbey, the Basilica of St Lorenzo in Florence, the Church of the Incarnation in Dallas and the inauguration of the new organ in the Abbey of the Genesee, New York. He has previously recorded both as organist and conductor for Herald AV and now records for Brilliant Classics with four recent CD releases of the organ works of Georgi Mushel and Hendrick Andriessen, and choral works of Maurice Duruflé and Arvo Pärt. A new jazz recording of the complete organ works of Dick Hyman was released in March 2016 on the ProOrgano label and choral recording of liturgical music on the Herald AV label in February 2016.

Ben has also been a drummer in two rock bands, keyboardist in the Edinburgh International Jazz Festival and is now studying the Classical Accordion – developing a project to introduce this new instrument along with piano, organ and melodica to children in West Yorkshire.

You can read a profile of Benjamin by Joe Riley.
(Copyright © Organists Review. All rights reserved. Used by permission.)